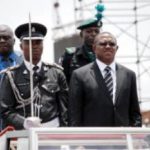 Obi is Anambra State's man When Henry Kissinger was the United States Secretary of state, Germans refer to him as ‘Unsere eigenen Mann’ which means  ‘Our own man‘ because  Henry (Heniz) Kissinger to them  is not just only a German American but a favorite one.  Governor Obi is ‘Unsere eigenen Mann’ which means in Igbo language ‘Onye nke anyi’ because he … END_OF_DOCUMENT_TOKEN_TO_BE_REPLACED