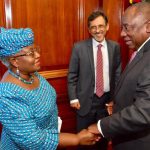 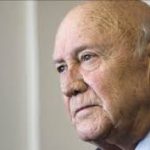 Written by AFP South Africa's last apartheid-era president, F.W. De Klerk, on Monday apologised and withdrew a controversial statement that apartheid was not a crime against humanity, following an outcry. De Klerk, 83, shared the Nobel Peace Prize with Nelson Mandela in 1993 for dismantling white-minority rule and ushering in democracy. But he sparked fury among many South … END_OF_DOCUMENT_TOKEN_TO_BE_REPLACED