Many African and Nollywood actors are living in Houston

Ben Affleck – Hollywood actor, writer, director and now an advocate for Democratic Republic of Cong wants to make a movie about Congo. Ben Affleck is the founder of the advocacy group, Eastern Congo Initiative (ECI), has just returned back from his recent trip to the eastern African country of Congo that has been bedeviled with instability since the era of cold war. Ben Affleck an actor, writer and director is asking Hollywood to finance a movie on Congo but he has received rejection letters from Hollywood moguls, movie financial houses and financiers.

“I would love to make a movie about Congo, but unfortunately I’ve asked Hollywood folks and they always say, ah, nobody wants to see a movie about Africa,” said Affleck. “I think that points to this general sense that people sort of tune out, that it doesn’t matter,” he said in an interview.

“It’s also a function of trends and conventional wisdom: if it comes down to a movie with fighting robots or a movie on what’s happening in eastern Congo, you’re not going to win.”

Speaking and sounding like an expert on a panel at the Center for Strategic and International Studies (CSIS) on U.S. foreign policy in Washington D.C: “In eastern Congo, conflict and insecurity continue while the guns have fallen silent in other parts,” claiming some 3.5 million lives. Ben Affleck emphasis further from the prepared report by the Eastern Congo Initiative (ECI), “The international community — and the US in particular — must do more to address the challenges in eastern Congo if another failure of humanity is to be averted in central Africa.”

Affleck said that making a movie on Africa has its problems, “But the other problem with movies about Africa is that there are no African movie stars in the United States. So the lead has to be someone who’s American, and you have to figure out how to get an American person wedged into a story about Africa.”

But maybe Ben Affleck has not heard about Nigeria’s Nollywood actors in America and Nigeria. Many experienced African actors and directors are living and working in Houston, Texas.

More on Democratic Republic of Congo 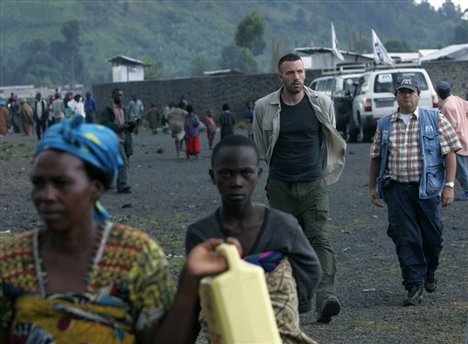 Affleck in Congo &  tragedy in DRC

From Mobutu Dictatorship to Kabila Disintegration

“Laurent-Desire Kabila marched into Kinshasa on May 17, 1997 and declared himself president. He consolidated power around himself and the AFDL and renamed the country the Democratic Republic of the Congo (D.R.C.). Kabila’s Army Chief and the Secretary General of the AFDL were Rwandan, and RPA units continued to operate tangentially with the D.R.C.’s military, which was renamed the Forces Armees Congolaises (FAC).

Over the next year, relations between Kabila and his foreign backers deteriorated. In July 1998, Kabila ordered all foreign troops to leave the D.R.C. Most refused to leave. On August 2, nationwide fighting erupted as Rwandan troops in the D.R.C. “mutinied,” and fresh Rwandan and Ugandan troops entered the country. Two days later, Rwandan troops flew to Bas-Congo, with the intention of marching on Kinshasa, ousting Kabila, and replacing him with the newly formed Rwandan-backed rebel group called the Rassemblement Congolais pour la Democratie (RCD). The Rwandan campaign was thwarted at the last minute when Angolan, Zimbabwean, and Namibian troops intervened on behalf of the D.R.C. Government. The Rwandans and the RCD withdrew to eastern D.R.C., where they established de facto control over portions of eastern D.R.C. and continued to fight the Congolese army and its foreign allies.

In February 1999, Uganda backed the formation of a rebel group called the Mouvement pour la Liberation du Congo (MLC), which drew support from among ex-Mobutuists and ex-Zairian soldiers in Equateur province (Mobutu’s home province). Together, Uganda and the MLC established control over the northern third of the D.R.C.

At this stage, the D.R.C. was divided de facto into three segments–one controlled by Laurent Kabila, one controlled by Rwanda, and one controlled by Uganda–and the parties had reached military deadlock. In July 1999, a cease-fire was proposed in Lusaka, Zambia, which all parties signed by the end of August. The Lusaka Accord called for a cease-fire, the deployment of a UN peacekeeping operation, the withdrawal of foreign troops, and the launching of an “Inter-Congolese Dialogue” to form a transitional government leading to elections. The parties to the Lusaka Accord failed to fully implement its provisions in 1999 and 2000. Laurent Kabila drew increasing international criticism for blocking full deployment of UN troops, hindering progress toward an Inter-Congolese Dialogue, and suppressing internal political activity.

On January 16, 2001, Laurent Kabila was assassinated, allegedly by a member of his personal bodyguard corps who was in turn killed by an aide-de-camp. Kabila was succeeded by his son Joseph, who reversed many of his father’s negative policies. Over the next year, the UN peacekeeping mission in the D.R.C. (United Nations Organization Mission in the Democratic Republic of the Congo, known by its French acronym MONUC) deployed throughout the country, and the Inter-Congolese Dialogue proceeded. By the end of 2002, all Angolan, Namibian, and Zimbabwean troops had withdrawn from the D.R.C. Following D.R.C.-Rwanda talks in South Africa that culminated in the Pretoria Accord in July 2002, Rwandan troops officially withdrew from the D.R.C. in October 2002. However, there were continued, unconfirmed reports that Rwandan soldiers and military advisers remained integrated with the forces of an RCD splinter group (RCD/G) in eastern D.R.C. Ugandan troops officially withdrew from the D.R.C. in May 2003.”    (US State Dept.)