It wore two caps: politics and literature. As politics,the 2nd annual Mu’azu Babangida Aliyu Colloquium preached unity and peace in a country wrecked by the evils of ethnicity, terrorism and corruption. As literary, it promoted education and used its rich heritage to preach unity by honouring the literary icon, the late author Cyprian Ekwensi by naming its new e- library the Cyprian Ekwensi Library.

It was commissioned by the Nobel Laureate, Professor Wole Soyinka who was also the keynoter. The theme was Nigerian Literature, Conflict and National Unity. At the occasion,Governor Babanginda of Niger State, also donated N10m to Association of Nigerian Authours for the publication of a literary series.

Still, it was a celebration of books and the arts. For example, the governor, Babangida Aliyu launched two books at the same time- 1st MBA Book  of Proceedings by the Chief Servant, and another book titled A Northern Icon. There were other books such as A book of citation, presentation of a Nupe Film, based on an adaptation of Ignorance is a disease, a book by Prof Mohamed Kuta Yaya, Chief of Staff, Government House who had spoken on the state’s drive for education, a poetry disc, pamphlets, plays etc. There were arts exhibitions, dance and drama presentations by Niger State students at the Hilltop Model School, Minna, as well as an adaptation of the national anthem by students of Government  Secondary School, GSS, Minna.

In a way, it pointed to the designed plan of the state under the guidance of its governor and the young writer, BM Dzukogi as aided by its leading writer such as Alhaji Abubarkar Gimba, Aliyu Dangana, among others to re-map the path of literacy and literary development in the state.

Digging into the history of the state as a railway territory which led many Nigerians to settle in the areas like Zungeru when it was headquarters of the Northern region, the state serves as  root to many great Nigerians who have either turned out as presidents or leading politicians and writers.

Some of the examples of such personalities include Dr. Nnamdi Azikiwe, whose father settled in Zungerou as a railway staff. There is  still an abandoned Azikiwe press centre in Zungeru today. The late Biafran leader Emeka Ojukwu was also born there as were the late K.O. Mbadiwe  and writers such as  Cyprian Ekwensi, Ben Okri, Abubarkar Imam, Haruna Mohammed, Abubakar Gimba, Yaya Dangana and so many others including journalists. 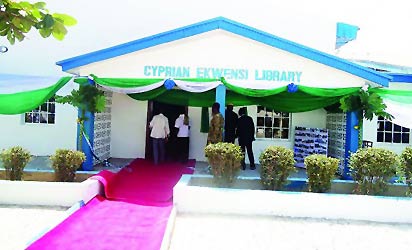 It was perhaps in recognition of this mix and  contributions that the state came up with its campaign of making it the intellectual capital of the world. This may be a long fight but it surely puts it on a sound footing to emphasise the value of education among the youth not just in the state but in the whole country.

At least these were some of the things the state governor, Aliyu Babangida, who is also chairman of the 19 northern governors told thousands of delegates that graced the event. At the commissioning of the library which Was witnessed by the family of  late Ekwensi led by his first son, George, Aliyu noted the importance of unity and the value of education to restore peace to the country.

He noted that until we respect those that teach and write, Nigeria will keep drifting. Teachers, he said teach values but many of the teachers in the North are not qualified. There is therefore need to celebrate those contributing to development in a country where about two million students graduate every year and there is dearth of teachers.

He said the state gave its name to Nigeria and was home to notable Nigerian leaders  with its railways attracting people from all cultures. Ekwensi utilised much of his environment in his novels such as the Burning Grass which depicts truthfully the Hausa culture, Passport of Mallam Ilia etc.

The e library, he went on, is important as everything today in the country has gone electronic such as WAEC, NECO, “We teach our people to approach education in e way”.

At the launch of the library where Soyinka tested some of the internet facilities by logging in to the Google search engine,Gov. Aliyu asked that all Ekwensi’s published books be bought and kept for use in the library. How this might be done can be difficult since almost all the books are out of print.

But Soyinka said it was wonderful to be around people of the book.-readers, writers, publishers, students. Ekwensi used to invite him as a hunting partner to check out the Minna wildlife. The two explored the forests, taking advantage of Ekwensi’s firsthand knowledge of the Minna environment. Ekwensi and Soyinka attended the same secondary school, Government College, Ibadan at different times. Ekwensi’s Iska was for Soyinka the introduction to the North.

“Cyprian Ekwensi introduced this part of the world to the rest of us”, Soyinka said. “He was a cultural mouthpiece for the North. Ekwensi’s writings had prepared me for an extensive tour of Nigeria which I undertook in my Land Rover shortly after Nigeria’s Independence. What we are celebrating now is not literature; it is an evocation; a sense of gratitude for knowing what we have come to know; what has made many of us contemptuous of petty dividing lines.

“Ekwensi was a great hunter. His works cut across ethnic divides and promoted national unity. What we are celebrating today is an evocation that breaks petty dividing lines. His work was a revelation to many of us. He introduced this part of the world to many of us in the south,” he said.

At the lecture held at the Idris Legbo Kutigi International Conference Centre, Soyinka asked, “What is the most valuable gift that writers can bequeath to others? Or what does the writer value most? Is it the sense of excitement that comes from transforming reality?’

The writers’ mission, he went on, is simply to bear witness, and thus implicitly, propose alternative national philosophies and such philosophies can be inducted by future generation as a viable direction for social conduct and insight into existence itself. Beyond that, no one should look to the writer for salvation.