Naira the fickle currency of Nigeria is quite sensitive to the depressing oil price in the international market.  Nigeria receives 75-80 percent of her foreign exchange from the export of crude oil. So once there are any negative changes or disruptions in the price of oil, it does adversely affect Naira and thereby reduces the quantity of foreign exchange accumulated by Nigeria.

The nosedive of oil price has the propensity to weaken naira and will induce the Central Bank of Nigeria (CBN) to prop it up with its limited war chest at its disposal. The weaken naira may trigger inflationary trends that may compel the CBN to increase the interest rate. At the interim, interest rate stood at 12 percent and further increase may make it more cumbersome for small and medium business community to borrow from financial institutions.

With increasing oil production by United States and the creping oil glut in the market. And together with the decreasing importation of crude oil by America, Nigeria and its naira are beginning to feel the pain where it counts especially on its budget and value of its currency.

The naira could not withstand the price nose-diving of oil and has become to depreciate in face to face confrontation with the dominant US dollar.  But Nigeria is without exception, other major oil producing countries including Russia, Norway. Canada, Ghana and others are seeing their currencies hit by the overflowing oil production in the market. 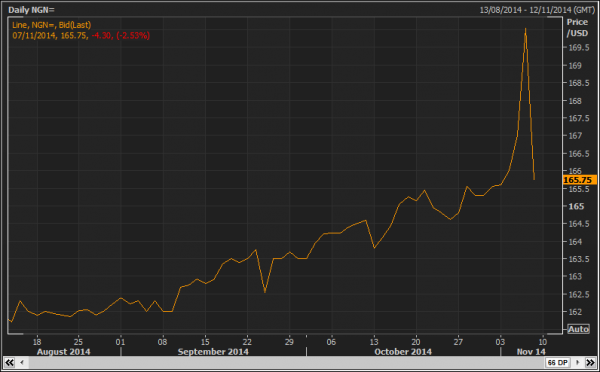 “The naira’s drop placed Nigeria among the oil-rich nations hardest hit by a production glut that has prompted a 28% drop in Brent crude prices from their 2014 high hit in June. The ruble also has caused headaches for the Russian central bank, while the Norwegian krone and Canadian dollar also have dropped. Oil and natural gas account for 96% of export revenue in Nigeria and about 80% of government revenue, according to the International Monetary Fund,” as reported by Wall Street Journal showed that oil glut is becoming a threat to oil producing currencies especially those that dependent mostly on oil export for its foreign exchange.

Nigeria’s apex bank, Central Bank of Nigeria (CBN) is now in a mood of fighting to defend and fend off the stumbling and weakening naira from aggressive and hostile speculators. But how long can CBN be in the fight before she concedes and throws in her towel. To be realistic, the battle to prop up and circumvent naira is quite expensive and Nigeria’s war chest is relatively minuscule. Nigeria foreign reserve stood at $39.5 billion compared to Russia’s  $454 billion, therefore Nigeria’s arm for struggle is not long enough to take on dollar for a quantifiable duration.

“Nigeria  has done the best she can do for now to up hold the naira’s value and the country’s “ central bank stepped in Friday to buy the currency after the U.S. dollar shot up to more than 172 naira, traders said, marking an all-time low for the Nigerian currency. The move lower is being driven by concerns that tumbling oil prices would hit Africa’s biggest economy hard. Nigeria is Africa’s top oil producer. Late Friday in New York, the naira recovered to 166.180 against the dollar, compared with 170.215 naira late Thursday”, as was revealed by Wall Street Journal.

Although, Nigeria has done a good job in the diversification of her gross national product. It has shown after the country’s rebasing of her economy that the previously unacknowledged sectors of the economy were vibrantly emerging especially the entertainment industry popularly known as Nollywood that has its own share of gdp at 1.4 percent.  Nigerian Gross Domestic Product (GDP) that was rebased “by the National Bureau of Statistic has underscored the decline in the contribution of the oil and gas industry to the GDP in recent times. Before the rebasing, the share of crude oil and natural gas to the nominal GDP was 40.86 percent in 2011, 37.01 percent in 2012 and 32.43 percent in 2013. According to the rebased figures, the share has declined to 17.52 percent, 15.89 percent and 14.40 percent for 2011, 2012 and 2013 respectively”, as delineated by Business Day.

But the hard reality is that country’s foreign exchange is chiefly derived from oil revenues. And oil accounts for almost 80 percent of the foreign revenue and this must change if a stable value of naira is to be maintained and sustained. Agriculture and Nollywood must be brought to bear for a greater share of country’s foreign exchange to be stabilized. It is not going to be an easy task to make those two sectors of the economy – Agriculture and Entertainment in competition with oil as regards to generating more foreign revenues. To make it possible, Nigeria must employed what I denote as ‘isolation-derived foreign exchange’, whereby Nigeria will concentrate in massive production and enhancement of a particular crop that can bring more foreign exchange than others.

Nollywood has not been given the attention it desperately deserves, because Nigeria is making ease money from the export of oil. Take for instance United States of America makes its second highest revenue from exporting its Hollywood to the rest of the world. Nigerian government can aid Nollywood to market its movies and music abroad by protecting the intellectual property and copyright. Nollywood can garner a sizable foreign exchange when its distribution channels and services are properly delivered and protected by intellectual property laws.

Naira can be protected and enhanced when sources of foreign revenues are diversified beyond oil. With Nigeria’s  limited resources it becomes a futile task to vend off speculators especially at this time the price of oil is floundering. The country’s war chest in not sufficient and sustainable to rebuild naira, thus becoming a herculean task to keep its value stable when oil is the only major source of foreign exchange. Naira’s sensitivity to the gyrating price, supply and demand of oil will continue until Nigeria diversifies her foreign exchange, a machination that will permanently put naira in a safe and fortified bunker.