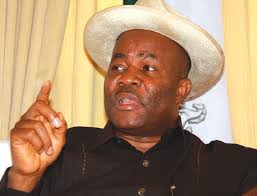 “Still struggling to come to terms with the reality of the defeat of their candidate by Governor Rotimi Amaechi, aggrieved governors Saturday distanced themselves from his victory, claiming that he ceased to be their leader on Friday when his tenure ended.

The splinter NGF, led by Governor Godswill Akpabio of Akwa Ibom and chairman of the PDP Governors’ Forum, presented Governor Jonah Jang as the new Chairman of the NGF.

They also announced plans to set up a different secretariat for their meetings so as to disconnect from the Rivers State Governor’s Lodge, which had been serving as their meeting point in the past two years.

Eighteen governors, who are sympathetic to President Jonathan and his anointed candidate, Jang, converged on the Benue State Governor’s Lodge in Asokoro and tried to discredit the electoral process that threw up Amaechi.

The governors who are opposed to Amaechi’s victory are: Godswill Akpabio of Akwa Ibom, Jonah Jang of Plateau, Idris Wada of Kogi, Gabriel Suswam of Benue, Sullivan Chime of Enugu, Martin Elechi of Ebonyi, Theodore Orji of Abia, Peter Obi of Anambra and Isa Yuguda of Bauchi.