Sure, France has Paris, Provence and the Palace of Versailles. But when it comes to optimism about the domestic economy, the French have nothing on Ethiopians.


The three countries with the brightest prospects in the next year are all emerging or developing economies in Africa, while three with the bleakest outlooks are advanced economies, according to a Pew Research Center survey conducted March 25 through May 27.


Nigeria tops the charts, with 92 percent of respondents seeing their economy improving in the next 12 months, compared with a net 5 percent who said it would stay the same or worsen. Residents in Burkina Faso and Ethiopia were similarly upbeat, with more than 80 percent of people in each country projecting economic progress.


On the other end of the scale, Poland was home to the smallest share of respondents seeing faster economic momentum in the next year, with just 16 percent holding that view. France — where almost half of those polled thought things would get worse — showed the weakest readings among advanced economies. See the best and worst here: 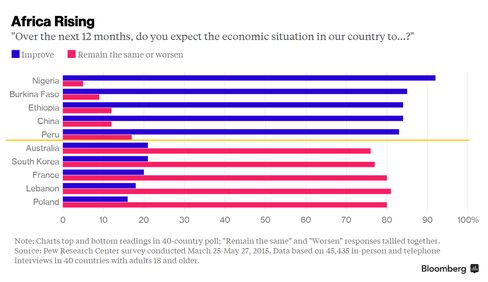 Nigeria and Ethiopia also ranked high on Pew’s survey of longer-term prospects. Each of those two had 84 percent of respondents judging that when their children grow up, they’ll be better off financially than their parents. See below how emerging economies stacked up against their advanced counterparts. There was widespread pessimism in richer countries like France, Japan and Italy. 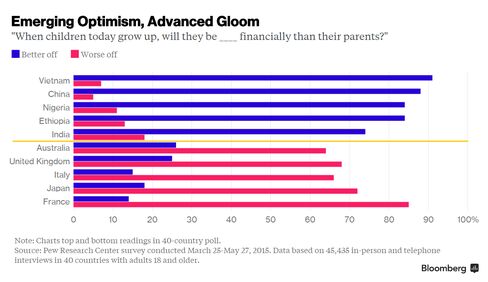 As President Barack Obama prepares to visit Ethiopia next week in a first for a sitting U.S. president, there are solid indicators of faster growth. The government will boost spending by 20 percent in the budget year that began in July, with more than half allocated for roads and higher education, State Finance Minister Abraham Tekeste announced last month.


Growth in Ethiopia has beaten every other sub-Saharan country over the past decade and is projected by the International Monetary Fund to exceed an annual rate of 8 percent over the next two years. The Pew data is based on 45,435 in-person and telephone interviews in 40 countries with adults 18 and older.