The groups have been responsible for thousands of deaths in northeast and central Nigeria, including attacks on churches and mosques and a 2011 suicide bombing of the United Nations building in Abuja, the statement said. 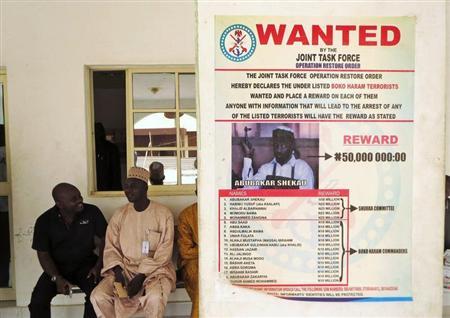 A poster advertising for the search of Boko Haram leader Abubakar Shekau is pasted on a wall in Baga village on the outskirts of Maiduguri, in the north-eastern state of Borno May 13, 2013.  CREDIT: REUTERS/TIM COCKS

“By cutting these terrorist organizations off from U.S. financial institutions and enabling banks to freeze assets held in the United States, these designations demonstrate our strong support for Nigeria’s fight against terrorism and its efforts to address security challenges in the north,” Lisa Monaco, President Barack Obama’s top homeland security and counterterrorism adviser, said in the statement.

“We encourage Nigeria to pursue a comprehensive counterterrorism approach that uses law enforcement tools effectively, creates economic opportunity, and ensures that human rights are protected and respected,” she said.