As African leaders gathered in Washington DC on the invitation by President Obama for US-Africa summit, the focus of the summit was centered on trade not aid. But the elephant in the room or in the minds of the summit participants is China. It is there for everybody to see that China’s business and commercial tempo in Africa is rising and rising. China is now the largest trading partner to Africa. Five years ago China surpassed the United States as Africa’s largest trading partner, with Beijing’s trade quantifying at the excess of $200 billion (150 billion euros).

There are an estimated 800 Chinese corporations doing business in Africa, most of which are private companies investing in the infrastructure, energy and banking sectors. Unconditional and low-rate credit lines (rates at 1.5% over 15 years to 20 years) have taken the place of the more restricted and conditional Western loans. Since 2000, more than $10bn in debt owed by African nations to the PRC has been canceled.”

In addition “One-third of China’s oil supplies comes from the African continent, mainly from Angola.[33] Investments of Chinese companies in the energy sector have reached high levels in recent years.[when?] In some cases, like in Nigeria and Angola, oil and gas exploration and production deals reached more than $2 billion.[clarification needed Many of those investments are mixed packages of aid and loan in exchange for infrastructure building and trade deals.”

Economist magazine reported, “When it comes to trade, America trails in second place to China, which has long held summits with African leaders and hosted individual meetings (unlike President Obama). Still, America hands out about five times more aid to the continent than China, and invests considerably more too. Meanwhile, European countries still enjoy colonial ties, as the healthy level of trade, aid and investment attests. In recent years emerging powers like India and Brazil have increased their links to the region—but only in terms of commercial flows, not philanthropic ones.” 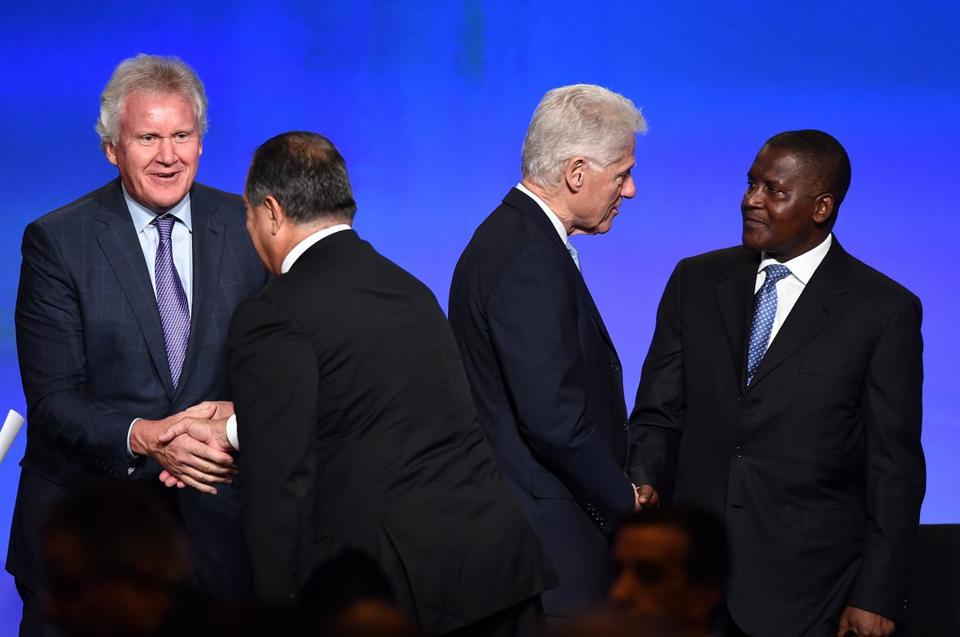 Although aid maybe needed now and then, but the key for Africa’s growth must be centered on trade and not aid.  Trade is the engine of commercial, economic and industrial development. No industrial nation has emerged on the global stage because of aid. Africa must shunned aid and must focus primarily on trade.

“No nation has been more aggressive in Africa than China. Its direct investment in sub-­Saharan Africa has jumped from virtually nothing in 2002 to $18.2 billion in 2012. China is hungry for oil, coal and other resources and eager to develop the roads, bridges and ports needed to pull them out of Africa.

Africans tend to favor doing business with China in part because it’s less likely than Western nations to demand economic and political reforms to accompany trade and development deals.

“Investors from the U.S. and Europe have tended to be large investors who demand all kinds of facilitation, who expect all kinds of conditions,” says Frederick Golooba-Mutebi, a Rwanda-based researcher and honorary fellow at the University of Manchester. “I do not see Europe and the U.S. catching up with China.”

Indeed, this week’s summit is seen as an American effort to regain some of the influence lost in the region to China over the past decade. Next year, the United States hopes to expand a 14-year-old free-trade deal with Africa.

On Tuesday, the Obama administration announced $14 billion in commitments from U.S. businesses to invest in Africa — money to be plowed into construction, clean energy, banking, information technology and other sectors. The money includes a $2 billion investment by General Electric by 2018, $200 million by Marriott and a $66 million commitment by IBM to provide technology services to Ghana’s Fidelity Bank.” – Associated Press

In addition, “Coca-Cola and its African bottling partners announced an investment of $5 billion, rising to $17 billion Coca-Cola’s investment in Africa from 2010 to 2020.”